Other (funnier, speedier) reviewers of this show have noted the duality of the Housewives: the light and fun women who flit around New York in a harmless way, and their darker doppelgangers, who aim to destroy and undermine each other. We open this episode with Fun Housewives: supermodel Ramona with fans whirring at a photo shoot. She’s modeling for her skin care line of Pinot Grigio soaked faith-based statement jewelry and has brought in a one-named celeb photographer, her fellow lush Sonja for tips on how to keep her eyes “soft,” and her funny assistant, who tells her she looks like a “Young Pamela Anderson.” Is that a good thing? So that’s a fun scene. Hair blown out and make up applied. Self-aware jokes about being stiff on camera. Poses. Airbrushing. Housewives bein’ housewives.

Next we head to Cindy’s giant white apartment in the West Village sky, where girls with long straight hair and jeggings hang out taking care of Cindy’s important stuff, including her little babies’ jeggings (they do exist and are wicked cute). Jill comes over to be fun and go yenta to yenta. Cindy sits on the table and they pretend to eat carbs. Cindy admits that some of these girls with the hair wake up with her children at night, which I’m sure most parents would kill for if they could afford it, but she still complains about getting woken up from the comfort of her cozy giant feather bed because she hears the girls with the hair taking care of her babies. OK! Not super sympathetic Cindy, but I do admire your honesty.

Read on after the jump…


Inevitably, the talk turns to Ramona. You can tell Jill is trying to be careful, because she knows her publicist is watching so she tries not to say anything that could be construed as negative in a court of housewives. But Cindy is trying to explain what happened at their Four Seasons summit and it doesn’t take Jill long before she’s talking light trash. “Her core is not good,” says Cindy, which might just mean that she doesn’t do enough Pilates, but Ramona looks pretty good for 50 whatever, so I’m certain Cindy means her moral center. And she’s right. Ramona is a ruthless (business) person and these are not her friends. She is inappropriate and probably an alcoholic. She is also the most unpredictable, and therefore watchable member of this show, and must bring it week after week. Cindy is further setting up herself as an enemy of the State of Ramona, but luckily for her, Jill will soon be up to her old ways, and Ramona will likely care more about that fight than about Cindy. Pecking order, remember?

We’re at Sonja’s place now, and Chris March from Project Runway is here! Random, but good to see him – a person with real talent, likely looking for another gig somewhere on Bravo. Sonja has decided to have a masquerade ball and invite the ladies. But she’s on a budget because of her divorce, so she has to have an unpaid butler send out the Evites and recycle an old wig an ex gave her when they were into Henry the 8th guillotine role playing. Apparently the wig is in really bad shape because everyone keeps talking about how gross it is, but Chris March is sure he can do something fabulous with it. 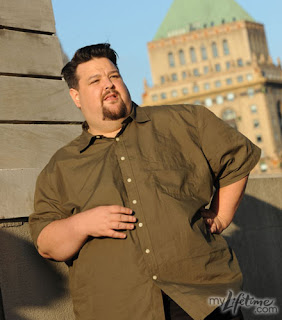 Luann and Jill meet up at the go-to Housewife costume place that does not get a credit (they must be pissed about that, since everyone and their mother on this show get a little title under their name!) They have a fun chick flick montage moment trying on period costumes, and laughing, and they are being cute — the light and fluffy housewives! It’s sad how these guys are always excited to get dolled up for a party which they know is going to end badly, with someone in tears and someone with broken shins.

Back to Cindy’s, where we meet the father of her schmoopies and learn a little more about that situation. Kevin and Cindy separated shortly after she had the babies, he gets to see the them “as much as he wants” and likes to flip them upside down when he does, annoying the vajazzle out of Cindy. And Howie. WTF is up with Howie and Cindy?! He “has a weird relationship” with Kevin, i.e. he has to “take off” every time he comes over to the house. Sexual tension much? Creepy. Cindy should hold and bathe her kids more often – she seems kind of awkward and nervous with them. Or maybe she really just dislikes her ex. But that would be a strange choice putting him on camera, right? I’m sure we’ll learn more about this at a later time – Bravo is giving us little pieces of this storyline to try and make Cindy more watchable.

Back at Sonja’s, she’s getting ready for the ball, wearing a pink housedress type thing and probably fluffy high-heeled mules. She orders her butler/dancer around a bit, because she really needs a man around the house. Her niece, which I always think is such a weird word if you say it a lot – niece niece niece niece — comes over with a very reluctant stylist. Every niece should have a stylist I think. Chris March comes over with the tricked out mask, costume and wig he made for Sonja. She coos, they air kiss, and he takes off. She dresses.

We get into a minivan limo and head down to the party at Cipriani – which has gotten quite a lot of press on this show – shame they couldn’t have given poor busted Sonja the whole restaurant for a few hours instead of the tiny “vault.” LuAnn probably heard about this, because she calls in sick to Sonja’s cel phone in the limo. Anyway, what does Sonja care, she’s already getting sloshed in the car, so we know its gonna be an ugly one tonight. At the moment, we’re still in light and frothy land, but it will not last.

Everyone is here in the basement of Cipriani. Alex is brunette and dressed as Cleopatra. She looks good and doesn’t do much at this party except avoid Sonja’s wandering eyes and hands as they evaluate her breasts. Ramona is so weird and pretends not to recognize Alex and Simon when she walks into the party with Smoove Mario, even though there are likely Bravo cameras on them.

Jill comes in and starts being Judge Jillsy about the food available, the size of the space, the guests. Cindy comes in a non costume-y dress. Sonja keeps talking about all her friends in Europe and then bends over and sticks her ass out for the second week in a row, claiming to have forgotten the ruffled underwear piece of her costume. So she’s mooning everyone and slurring and honestly I zone out for a moment so I have no idea what was really said. But it was getting really fratty all up in the vault, and Sonja was screaming at her waxed chest boyfriend the Artist guy about a bruise on her ass, and I actually started surfing the web and looking at purses. The episode was sliding into the darker side of housewife land, though the camera lights still burn bright.

Kelly has a nice quotable nugget aimed at Sonja and her drunken booty showing: “I didn’t realize Sonja was so free and flamboyant with her body parts. I’m 42 years old and I want to like, hide things.” From the woman who last season POSED FOR PLAYBOY. Lord.

Cindy and Jill go to get Cindy’s teeth fixed, because that’s what friends do together. Jill knows a lot about medicine and she is telling the dentist what to do with Cindy’s giant amount of teeth. The dentist seems like a cool guy but this is a terrible storyline and I had no idea so many people had fake teeth. That’s really all I have to say about this.

Now we’re at Ramona’s wine tasting party in a restaurant. As I mentioned, Ramona likes wine, so she made her own and put her name on the bottle.

Here’s Jennifer, you know, the one who let the show film her wedding where all this drama happened with Jill and Ramona and Howie and the girlfriend and the cigar? She has a weird accent. What is that? Minnesota? Canada? She tells Ramona that Jill was harassing her at her wedding and asking her why she invited Simon and Alex. According to Jennifer, Jill also wanted to know, how close were Jennifer and Ramona? Ramona is totally leading the witness.. Oooh, Jennifer is so exaggerating – she absolutely will be on this show next season when Cindy takes off. Ramona is upset.

Alex is sipping wine and has a great line. “Ramona is to Pinot Grigio as salt is to the ocean. “ The Countess is here and now is an expert on wine because of her boyfriend the French guy who used to be on Perfect Strangers. So she obnoxiously quizzes Ramona until Ramona grows flustered and tells her to STFU. LuAnn knows Ramona is about to go off, because of the look she has in her black holes eyes.

Here comes Jill, oblivious to what’s about to happen. Ramona is panting to confront. Ramona is so angry with Jill for talking behind her back! Jill denies, tries to fight back (Who said it? When? Where’s the documentation? – she would have made a good reporter). Now Jill tells Ramona she shouldn’t ambush her. She has NO right to do this to her at her party. This is such a good fight!!! Jill storms out and Ramona is shaking and Jill runs smack into Jennifer, who tries to compliment her coat but Jill cuts her right off. They discuss someone who gets beeped out who said something to Jennifer at the wedding and then end up hugging.

Meanwhile Ramona is ranting and waving her head like a maniac to Alex who looks worried Ramona will drink her. And then Jill decides to go back into the party and confront Ramona again. Great idea Jill. This will not end well. She worked it out with Jennifer, which doesn’t mean that she didn’t talk sh** on Ramon. This is insane – all these women do is talk behind each other’s back! “Say it to my face,” says Ramona. “Why don’t we have lunch?” Jill says, wonderfully. Ramona: “I wasn’t having a fight. I was having a discussion,” but a discussion where you scream at each other. This one has no class – that one has no manners! Ramona’s head is likely to snap off her neck. Jill is staying calm and telling Ramona she needs help. She looks incredibly sober next to Ramona.

Now Jill crying in the car to Bawby on speaker phone. He is consoling her. Love Bawby. Jill is bawling her eyes out to LuAnn and calls Ramona a bitch. Yes! Jill is back! LuAnn is supporting her. And clearly she’s setting up the “Ramona is an alcoholic” intervention scenes that are sure to come. Jill even references that during her fight – “Ramona, you’re out of control.”

Oh, parties. So much promise and anticipation before hand, much regret, clean-up and Pinot Grigio hangovers afterwards. Where are all those unpaid European butlers to dance us away from our darkness at the end of the night?

« Musing On A Past Life, Pre-Kids » One Mom’s Quest For Order – At The Container Store