RHONY Episode 13 Recap: Cyber Bullies and the Women Who Love Them 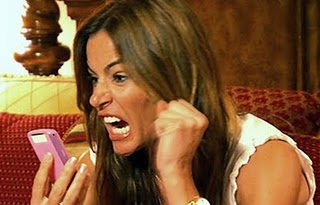 More parties! Not to be outdone by her daughter’s blowout last episode, Ramona decides to throw a soiree for herself. She brings Kelly and Alex into some kind of space age looking party space with swings and shag carpeting, with yet another event planner. I guess Ramona didn’t like the last two she used for her vow renewal and Avery’s Sweet Sixteen, or else the Housewives keep using new ones every week to get everything for free. Likely the latter.

Ramona decides to do something nice for her poor bankrupted friend Sonja – throw her a scrap and let her be part of the birthday party, too – but make it a surprise. Kelly is all, “Ramona, the tone of your voice is so sensitive right now. I can hear it.” Kelly is a total freak. She has nice hair but she sucks otherwise.

Cindy is having a party to launch a new line of “vajewel and bikini wax kits” with many important people from “her business.” So who are the big players in the vajazzling business? Bloggers, editors, and people who are willing to lift up their shirts and apply rhinestones by their pubic line.
Read on for the full vajazzling…

OMG Jill’s ex-husband Brad is back! He had a taste of the old Housewife life in Morocco and got right on that flight from Marrakesh to Manhattan. He just couldn’t stay away. Simon volunteers to get his chest waxed by Cindy. Gross.

Kelly arrives to the party late, yet again. Is there anyone more annoying than the person who comes to every event 2 hours late? The invite said 5 – 7 but she was like, what is this a business meeting? Um, yes, kind of. Kelly didn’t want a vajewel applied because you’ll remember she’s scared of being near vaginas but opted instead for a crystal on her mole. There’s something on your face, someone said to her and she was like, no it’s a Swarovski crystal. Duh. First of all, she says the most ridiculous shit. Second, how can someone sell jewelry for your moles???? These people should seriously be ashamed of themselves. Don’t you wish the South Park guys could do a musical episode about the Housewives — now that would be worth watching!

What Would Simon Van Kempen Do?

Simon comes over to talk to Jill. He wants to have a sit down, but not here at Vajazzle Fest 2011. He wants to take her to lunch. People on this show are always approaching each other and saying, “let’s talk …. but not now. How about … somewhere in an empty restaurant where we can drink water and have a weirdly edited conversation about nothing.” Kelly decides that Simon is weird and tells Jill so, over and over. She clearly needs a thesaurus. Jill takes this “advice” to heart and tries to get out of having lunch with Simon, who is a bit menacing to her when she tries to wiggle out of lunch. “Look out,” he says like the Goth girl in high school who goes home and whittles a grenade out of soap that she leaves in the popular girl’s locker with a note. I don’t know why I feel defensive of Simon. I absolutely shouldn’t be because he is rather ghastly, but I just
hate the rest of them so much.

Jill and Kelly bring LuAnn into the fray – how dare Simon try to make a lunch plan. How inappropriate! They say he has been sending mean tweets about Jill and Kelly. LuAnn says, “Darling, Alex and Simon are definitely trying to use us. They want to be a part of our group. Alex needs to put a leash on him.” OMFG! LuAnn you are such a loser. Please stop mean tweeting me Simon, says Kelly. Be a man. Alex decides to steer him out. Yes, leave before someone ends up getting punched in the family vajewels.

The brunettes continue to hag out and talk smack about how awful and inappropriate it is that Simon would try to have a conversation with Jill about the great tweeting incident that has been going on off camera. I don’t really understand twitter but I guess Simon uses it to promote all his weird businesses in the EXACT SAME WAY the rest of these hypocritical women do, but has made mention of the show and the antics that go on between all of these bitches. Though he’s creepy as all get out, I’m unconvinced that Simon has done anything wrong here.

Poor Sonja. She envisions herself holding a can on the subway, so she won’t throw things away. But she wants to get rid of old people and things in her life. Kind of loving this feng shui lady. She’s keeping it classy. Sympathetic. She wants to help Sonja be fully herself. I understand why people think this kind of new age stuff is hooey but also why rich people think it helps them.

Jill, Kelly and LuAnn are painting? Of course no one is actually painting, but Jill is wearing a hairclip from 1984, which I like. Jill is scared of Simon because he is cyber bullying all the ladies. They are throwing the word bullying around way too much. LuAnn: “Why are those two trying to get attention?” she of the recent “Chic Ce-L’vie” song and video. She finds it creepy that he’s using this show to further his career! Pot kettle pot kettle pot kettle? Kelly is obsessed with the idea that a man could cyber bully a woman. I think she’s getting all of her PSA’s confused. She’s trying to link this with domestic violence somehow. “He thinks he’s part of the group,” LuAnn says. Uch, how could anyone want to be a part of this group???

Alex and Simon in Brooklyn. Alex, “After all that ‘confab’ with Jill, where do you stand? Are you mad?” When they are talking to each other, Simon and Alex often sound like they are on a soap opera. Alex is happy she and Jill are in a better place, but she can’t be friends with Jill if she’s gonna shun her man. Part of what motivated Alex to make up with Jill is the friendship she and Simon shared. What? This is when these two lose me with their disillusionment. And Simon really does need to not act like a chick. But it must be fun for Alex – I’m always trying to drag my husband into gossipy conversations and he simply won’t do it. So that’s nice for Alex.

Now we’re at Ramona’s party getting ready for the part where they surprise Sonja. Jill is such a wuss. She’s not going to have a conversation with Simon here at the surprise party. The show’s editors having fun with her. Are these scallops? Are they cooked? They make her look like such a JAP. Sonja looks great in silver sequins but she is gonna pass out because Ramona surprised her with the rose ceremony line up of Sonja’s old buds. It’s a collection of all New York City’s finest plastic surgery doctors’ work. Sonja is confused. She’s used to control. She’s overwhelmed. “It’s your party, no, its your party.” Ramona loves her — so it’s sweet. Ha ha look at the sexy violinists. Cindy is a little late but she is making nice with Ramona and Sonja. She left her company Christmas party for them. Kelly is introduced to a man who says he has met her before. She pretends not to know who he is.

Jill looks very tense. Ramona tells Jill that she knows about the Skweez™ Shapewear party. Ramona is a businesswoman (so she’s mentioned) so she would have a hard time not telling Jill how she feels about her business decisions, but the bottom line is that she doesn’t want negativity around her. Jill is glad Ramona called her out in a nice way. Really? Who like being called out? Ramona is still wondering if their friendship can go to a deeper level. I would say no.

Can See into Your Soul
Mario takes them into a room with a giant slideshow of both Sonja and Ramona super tan with amazing bodies. Mario is younger and tanner and hotter as well. They all seemed mesmerized by the pictures, and we as viewers are too. Sonja is very grateful to Ramona and can’t help but name drop how all of her friends are on their way to St. Moritz or Palm Beach. How did she ever get them to come? I don’t know, maybe being on this show?

Mini scene with Cindy and Ramona. Cindy doesn’t want to meet a man. She’s not interested. So maybe she’ll meet a nice woman while she’s waxing them. Is that ethical?

Now Cindy is going to see her parents. Her one and a half year old daughter Zoe is wearing all white, which is super practical for a lunch. Cindy doesn’t know how to use the highchair. She probably has never gone anywhere with both kids or even one. Ugh, this is really gross. She calls in one of her employees to come to the restaurant so she can “relax.” Wants to take a trip with the kids but how can she do it? Should I go first class? She has no idea how to travel with the kids. I know, look on the Internet, ask your friends, or bring someone with you on the trip!

Kelly and Alex meet. Kelly is late. So fucking fake. She knows she kept Alex waiting. “I wanted to check in. I’m concerned.” Why is she always concerned? It hurts her feelings. Oh, the old “it hurts my feelings.” Good one. You can never argue with that. Alex tells Kelly to talk to Simon about her concerns and she says she won’t. Again, Alex is right. Kelly: “I don’t get what you’re doing. I’m a nobody. I live down the street. Don’t tweet about me. I don’t want to have a confrontation with you.” But you’re here because you asked her to lunch to confront her!!! Alex looks pissed. Love her on camera angry soap opera looks.

More soon. Thanks for sticking with me on this one. A pretty bad episode all around. From the look of the show, it was shot in the dead of winter. And it feels it.