Truth be told: I thought this was not only the end of Morocco but the end of the series. And I was not unexcited to be getting to the end. These housewives are making me weary. These pretzels are making me thirsty. But upon actual viewing, this episode turned out to be a lemony zesty tagine of Housewifery, so here goes my report.

Jill is not going to let the fight with Ramona get her down. She is moving on. Which means she will probably make up with her later in the show because her PR people back in NYC are telling her that people are more likely to buy her shapewear if she takes the high road with Ramona. 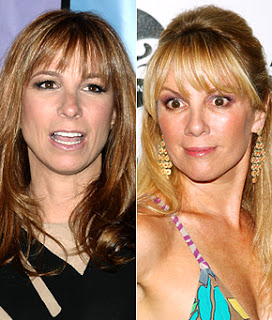 The brunettes are on a tour of a beautiful palace. Mustapha is full of stories of concubines and wives. Jill makes a sex joke – only having to do it with her hubby once a month – I’ll take that job, she says. Jill asks lots of questions about tiles and fabrics. Good for her that she’s interested. Sonja thinks Mustapha is hot.

For more RHONY shenanigans, read on after the jump…

Alex and Ramona are hanging at the riad. Ramona’s relationship with Jill has been a sham. Ramona is admitting that she is hurt. Alex is so happy to be liked by Ramona. Ramona has a soft side you know. She made herself vulnerable to Jill and she is now devastated. They discuss how LuAnn is trying to pick a fight with Ramona. How do they fix this? LuAnn is being set up as a bitch, which she is. Wingman promises are made. Alex takes this stuff seriously, which I find sweet. She wants really badly to be a part of things. And her hair looks normal finally.

This (dramatic pause) is henna says LuAnn. She has this way of acting like she invented this country and culture. Annoying! Anyway, she’s set up a henna tattoo session for the brunettes and her, Kelly, and Cindy settle in to get henna-ed. Alex comes down the stairs loudly and enters the room with a lot of adrenaline. “Is she trying to interrupt our henna session?” says LuAnn bitchily, but then encourages Alex to sit down. Kelly to Alex: You can’t be inauthentic. Its weird, it didn’t look normal, it’s weird. Re-enter. It’s weird. She wants her to do a “take two,” coming down the stairs and entering the henna session. WTF? And Kelly had been behaving so well!

LuAnn is such a bitch. It seems like Alex wanted to speak to her privately on Ramona’s behalf but the ex-Countess forces Alex to speak in front of the other brunettes. So bloody condescending. “Thank you very much, you can go now.” She actually says this! Alex is so awkward but her heart is in the right place. Kelly keeps trying to interject. Kell: STFU! Alex is trying to defend Ramona and LuAnn isn’t having it. LuAnn keeps dismissing Alex. Go back to the cabinet you came out of. Then she corrects her own grammar. Cabinet “which” you came out of. HOLY MOTHER OF GOD. This woman needs to be smacked.
﻿

Meanwhile, Ramona is sneaking around with Sonja trying on the specially designed caftans in the caftan wing of the riad. You do have to feel bad for Alex because she’s going to bat for Ramona against LuAnn and neither of the blondes invited her to come on their little late night sneaky adventure.

Kelly is still railing at Alex. What the hell are you talking about Kelly?!?! Alex finally says. Christ! Kelly starts shushing Alex. Kelly thinks Alex is a toddler having a tantrum. This is classic. Alex admits to being angry. You’re not angry, you’re sad. You’re sad. Not mad. Sad. Not glad. Sad. Any credibility Kelly had last week is gone gone gone.

Jill comes in with bad poodle hair and sort of diffuses Kelly and her Sesame Street emotional lessons for Alex. Poor Alex. She’s really trying. I don’t blame her for choosing the blondes. Ramona in a confessional about Alex defending her: she knows it did not go well for Alex. “Alex is not exactly known for her timing.” Ramona could destroy LuAnn – she certainly doesn’t need Alex to defend her, but Alex gets these bees in her bonnet about what’s right and needs to go off on these bitches. I can’t blame her self-righteousness but with all the editing she does seem rather off.

Next scene, LuAnn is pissed because the blondes haven’t come down to the dinner she “organized”. They ordered dinner to their rooms apparently. All the brunettes are talking about Alex’s outburst. I love Kelly saying that Alex was inappropriate. No self-awareness AT ALL. Her behavior was “APALLING,” says LuAnn. She is so campy! Now LuAnn is calling Alex a witch and Dracula. Jill is trying to stay positive and be nice. Luann says “I am not into petty.” Jill, “Oh, I didn’t get the memo.” Uh oh, Here comes Alex! Luann looks up. Hi. Her face is perfect. “We started half an hour ago so we didn’t thing you were joining us.” Patronizing. “The kitchen is closed but we’ll make it work for you.” What is her job on this trip? The RA of the riad says Ramona.

Alex wasn’t told dinner was at 8. “I know you know better than that,” scolds LuAnn says. “You have an education. I’ve organized this dinner.” Luann keeps saying we’re done, but keeps on going. And Kelly keeps interrupting!!! OMG. Alex is escorted out by Kelly. I hope Alex can redeem herself. This is bad for her.

﻿Cue Cindy. Is this reality? No baby. Reality show.

Ramona and Sonja arrive at the table. “We didn’t order dinner. That was a snack darling,” says Ramona. “This is not the plaza hotel darling,” says LuAnn. Now LuAnn is on the warpath. Here comes Ramona with the snacks, piling them on the table. She is committing to the snack defense. How am I on Ramona’s side? How is this happening?

Ramona tries to apologize to LuAnn. Ramona may be lying about what time dinner was. Stop running away from me, LuAnn says. She’s trying to connect with her about the Mario thing, because she got cheated on. Nice. Ramona: “I really think LuAnn wishes what the psychic says is true.” She’s right of course. She knows LuAnn would never be there for her.

The blondes all wake up in the morning. Did they all sleep in the same room? Here’s Alex being slightly awkward again.

Cindy talking to LuAnn. You have to take care of yourself. Go on trips with your girlfriends. Wear your sunglasses while talking to people. LuAnn looks good in white jeans. I’ll give her that.

Kelly goes running in her five necklaces and sports bra in a Muslim country. Nice.

Cooking lesson. Cindy to the instructor – “I’m not a big cook.” Sounds so Jewish! But then, surprisingly un-Jewish. “I don’t, like, indulge in food. I don’t even see the point in it.” Oh boy. Cindy, I thought we were friends and you were going to take me to Canyon Ranch. Obviously we have different priorites.

Alex tries to have a moment with Cindy. “I thought you were just mad all the time.” She does an impression: “I’m Cindy and I hate everyone.” Does Alex need a talking to?

LuAnn teases Sonja about the toaster oven. Is Lu being fun? Hard to tell because she is hagging out so hard this episode. They eat the food they made in the things with the spices and preserved lemon and have a laugh.

Getting made up for the final night out. And what does Ramona wear to get make up put on? A very short, very tight leopard print dress. Nice.

Cut to New York City where the boys are playing pool. This scene is badly edited to make Mario look like a cad. He is really dumb and thinks the ladies are in Dubai. Native American Marrakesh designs. He and Ramona and meant for each other.

The ladies are all dressed in their custom caftans and ready for their final night in Morocco. They look somewhat like whores, but pretty ones. It’s all good! Nice looking restaurant! Sonja is in the in crowd and got the ressie for the place. LuAnn again takes credit for the trip. They toast to harmony.

Everyone has to go around and say what they liked best about the trip (THAT LUANN ORGANIZED!).

Alex goes first. She was last here with a five week old baby(!?). And now she’s been able to see things through different eyes…. LuAnn cuts her off. Did she like the souk, the belly dancing, what? Alex makes it easier – these women aren’t listening to her anyway. She likes … the hamam. The hamam it is. Sonja likes Mustapha. Awwww yeah she does. On her naked run, Kelly had a woman in the village say “Santa,” to her, which meant, yes, Santa WILL fix your henna tattoo. Kells really liked that. Jill liked the tent in the desert, which LuAnn had sewed together with her own hands. Cindy liked staying on the camel and not falling off like she wished LuAnn had. And LuAnn, of course, because she has to own something and make it a catch phrase for her next stupid book or other idea, likes, “Ya Habibi.” Which, actually, is catchy. I’m sure it will be the title of her next single.

Ramona didn’t say what she liked. Not sure it was a great trip for her. We shall soon see what the fortune teller wrought.